November Has Been Great! 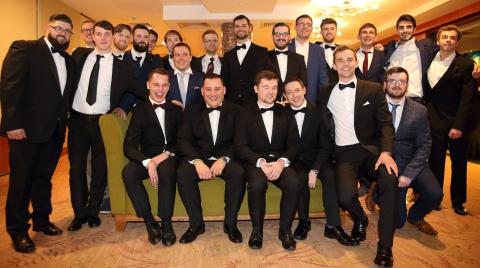 On the 3rd of November BGF Ravens have celebrated the 60th Anniversary of the club but before we could begin the festivities we had a match to play early that day against Old Belvedre RFC. This was a tough game as both teams were playing for the position at the top of the league. Fortunately Ravens have come out on top with a 15 - 9 win that has placed us on top of the league. The team made a fantastic performance and the results has set the mood nicely high for the anniversary celebrations.

The BGF Ravens 60th Anniversary Gala Dinner & Casino night was enjoyed by all who came. It was also a great opportunity for the retired, senior and junior players to get together and talk about where the team was and what it took to get it to where it is now.

We would like to thank everyone who came and contributed to the teams cause. And we would like to give a big Thank You to Richard O'Reilly for organizing the whole event.

It has been announced at the anniversary gala dinner that our team will be getting new jerseys along with new training kit. The 2019 jerseys are made by new manufacturers, they will be proudly showing our new sponsors and they look awesome. More information along with images of the new jerseys will be posted at the end of December, so keep an eye out.